I’m pleased to have decided to put in a large rainwater tank when we had the opportunity. Every time I use water in my garden now, it’s good to know that I’m not using mains water but just using rainwater that has been saved in the tank. I first started by dreaming of a natural garden in lower part of our property, and had been starting to work on it (Garden Diversity and Slugs, Scything with frost, Planting trees and shrubs – 24 of them!, Rows and rows of windrows) and then, when we decided to build a pottery studio at the edge of this natural garden, we had the option to install a rainwater tank to collect water from the roof of the new studio. If we were going to do it, now was the right time.

I sourced the rainwater take from RainWater Harvesting here in the UK, and I decided to get the 3000 litre shallow dig version and it was a bit surprising how big it was when it was delivered. 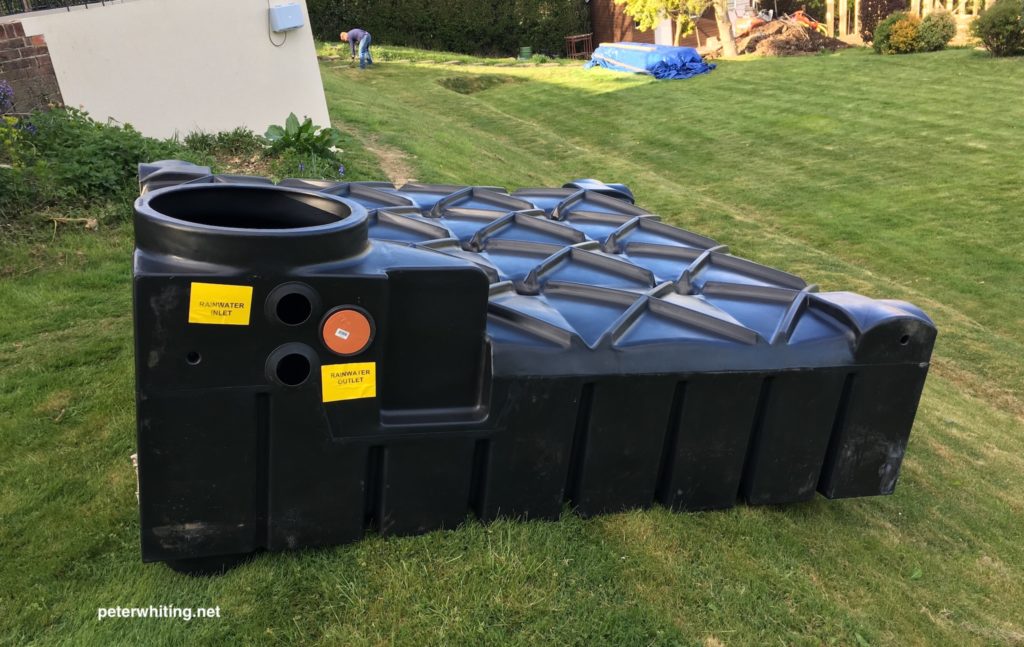 It was quite a lump to move on down to the lower garden. Here below are a few photos of it making its way down towards the pottery studio we were building. The aim was for this rainwater tank to be dug into the ground beside the studio so that all the rainwater runoff from the studio will go into the tank. In the last photo above, you can see the digger on the right which is being used to dig the hole for it, which will be just to the side of the new studio there. Also, you can see the beginnings of the natural garden just a bit further down the hill, below the studio.

This rainwater tank required a serious hole, as you can see below (part-way through digging – not finished yet), and it also needed to have a soak-away dug and installed, because the excess water needs to go somewhere when the tank is full. In the photo below you can see that all that shows after the tank is installed is the round manhole cover that gives access to the tank. Inside the tank is a pump that is lowered down on a rope. Notice the power cord along the ground here that leads from the pump to a power socket on the side of the pottery studio. Shortly after this, a plastic pipe was dug into the ground so that the power cord could be safely run through that, rather than being exposed on the surface. (Also, you can also see the beginnings of my potential nemesis – all of the churned up ground near the underground tank was a perfect breeding ground for stinging nettles, thistles and weeds, not to mention being full of about a trillion rocks!) The next step was to connect the tank to a tap. You can see it in the photo below. This is the only access to the rainwater tank and it’s important that it’s somewhat different to normal taps because the water isn’t suitable for drinking. The pump in the tank is pressure activated. The power remains on all the time and whenever it senses a drop in pressure, it turns itself on to pump water. So all you need to do is turn the tap and water pumps out. From this tap, I connected two garden hoses end-to-end so that I can reach all the parts of the garden that I need. So the end result is that I seem to have an endless supply of rainwater to use in the garden whenever I need it. The hose also easily reaches the greenhouse I’ve installed, so I’m simply using water from the rainwater tank everywhere and saving mains water.